The Impact of Typhoon on PV Systems (2/2)- Module Strength

The Impact of Typhoon on PV Systems (2/2)- Module Strength

3. Module Strength
Module strength mainly depends on the glass, frame, cell breakability and the interaction of all these factors.

3.1 Glass
Only few years ago, 4mm glass was commonly used and it was much stronger than 3.2mm glass. The capability to resist bending force is proportional to the cube of the thickness of the component, so the 4mm glass is ‘stiffener’ than 3.2mm by (4/3.2)3 = 1.95 times. That means the bending resistance of 4.0 mm glass is almost twice as much as 3.2 mm glass. Currently almost all module manufacturers use 3.2mm glass, and even 1.6~2mm glass is already in mass production. Generally 3.2mm glass is still sufficient to resist 5400Pa uniform pressure, but it is not strong enough for local loads like people stepping on the module. (read more in ‘Can people step on the modules?’). Thinner glass with 1.6~2mm thickness is insufficient to resist 5400pa uniform load with traditional design, the module need additional reinforcement in frame or fixing measure, otherwise the huge deflection will result in serious cell cracks..

3.2 Frame
Frame looks sample, but there are a lot of tricks inside. Below is a cross section of module frame, three important factors are front width D, frame height H and bottom width W. When D is too small, the glass is not held deep enough, so the glass is easy to be blown away, especially under negative pressure. The photo below shows an example happened in the recent typhoon, the glass is blown away but the frame is still there. 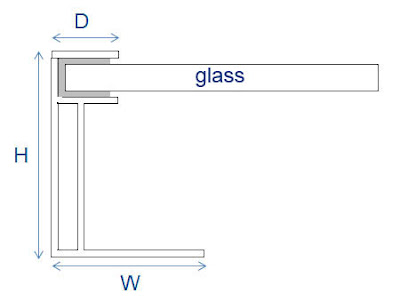 There are more and more manufacturers reduce the frame height to reduce the transportation cost, but if they do not strengthen the module in other aspects, the conventional frame will be too weak to resist high external pressure. The photo below shows broken and deflected frames caused by typhoon.


Another problem rarely noticed is the frame corner. Most modules use L-key to fix frame corner, but it is also getting thinner and thinner as cost reduces, and the consequence is the corner strength is also getting lower. The photo below shows many open corners in the modules damaged by typhoon.

For modules with the same glass and frame design, the deflection under pressure could be very similar, then the cell ‘breakability’ plays an important role. The breakability mainly depends on the wafer material, and also depends on the micro cracks and internal stress induced by stringing process.

The photo below shows a system we evaluated with EL inspection after typhoon, the upper left module was hit by other object and the glass was completely broken. The rest of the modules had perfect appearance, but the EL image showed serious cracks. Fortunately they had EL inspection in the acceptance test, and the images showed no cracks at beginning. That means the cracks are induced by the typhoon. The module was certified with 5400Pa load resistance, and the wind load was not over 5400Pa, why the cells break? Sometimes the soldering parameter is not appropriate, or the wafer has more defects, the cells are prone to have cracks. The module suppliers should prevent this kind of defect with internal control, like in-line EL inspection and cell peel test.

As a summary, the strength of each part of the PV construction is equally important. I have not seen any structure supplier has a product specially designed to prevent typhoon issues, but I did saw one module supplier has ‘Typhoon-resistant’ solar module in PV Taiwan Exhibition. After checking the design of the Typhoon-resistant module, and with WINAICO’s consent, I may comment on this product.

HeatCap cells have special material coated on the rear side of the cells to resist breakage. WINAICO provided the test result from ITRI (Industrial Technology Research Institute) PV Lab, and the result shows it outperforms traditional modules in mechanical load test with 4000Pa (figure below). The coating successfully stopped the cracks from rapid growth under large module deformation. It is specially helpful for mono cells because the cracks in mono cells grow much faster than those in multi cells.


Regarding the frame strength, the bottom width W is added to 50mm to increase the bending resistance. These three features all together really make the PV module capable of resisting strong wind in Typhoon.

A small negative is that the cost is a bit higher. From my understanding, the module price is few cents/Wp higher than normal modules. But it is reasonable, high quality always come at a price. When you ask for high strength products, you have to pay more, but the customers also get more. You got to make the choice by yourself.

Note:
In order to explain the factors resulting in damages, the root cause of the damage in the photos shown in this article is simplified to be one single factor. The real root cause could be an interaction of several factors, which needs more investigation at site to make a conclusion.