Can people step on the modules? 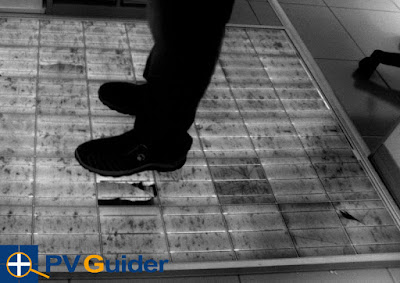 Can people step on the modules?

Can people step on the modules? Although we have seen a lot of module damage in the field (On-siteEL is starting a quality revolution), but many people still doubt it. Frequently asked question is that modules can pass 5400Pa mechanical load test, which is 890 kg uniformly distributes on standard module (1.65m x 1m), why workers with weight less than 100 kg can not step on the module?

First of all, there are always cell cracks after 5400Pa mechanical load test, and it is judged as ‘pass’ only because the power degradation is less than 5%. But I believe your customer does not like to have new system with 5% degradation from the beginning. Secondly, the 5400Pa uniform load distributes on the module uniformly, so the deformation is smoother than concentration load. People stepping on the module is a concentrated load, it makes the glass bend in a high curvature locally and results in cell cracks at the location.


Let me explain the difference of uniform load and concentration load with the below drawing. The deformation of concentration load is close to the stepped position, and the max curvature is at the stepped point. On the other hand, the deformation of uniform load is more uniform and the curvature is less. The cell breakage is highly associated with the deformation curvature, so the cracks appear at the location with large curvature. Therefore, even the workers’ weight is much less than 890 kg, they still make the cells break when they step on the module surface.

Smart you might find another fact, the broken cell location is related to the form of external loading, so we can tell which type of force caused the damage by the broken cell position. Yes and no, we can judge in this way, but not as easy as the drawing above. Because the above drawing simplifies the module into a single beam, but the real module is a plane, and the breakage mode is much more complicated. I don’t want to make you mistakenly think it is easy to tell the failure mode, but if you have any problem judging the failure mode, you are welcome to contact us with more detail information, then we can help you to determine the damage is in transportation, installation, maintenance or originally from the manufacturer.
If you still doubt the damage of stepping on modules, let’s have a look at our experiment. We let a man (about 75 kg) stand on the module, and take EL image (see the photo below). When he steped on the module, we heard the sound of cell breakage, and immediately saw the cracks and dark area (see the photo on top).

Here comes the most interesting part, when he got off the module, the dark area was bright again. From the animated photo below you can see the module was deflected because of the weight, and the cell crack was opened so the areas were separated from the main part of the cell. As a result, the current could not flow into the separated areas, and that is why you see the dark area. When the man got off the module, the glass bounced back to the original position, and the separated parts connected to the main part again, so the current passed through and made the EL image bright again.


Below photos zoom in to see the enlarged image, the upper is before stamping and the lower is after stamping. You can see the cracks are still there when the man get off the module.

We have seen a lot of this kind of crack in the field. At beginning the cracks still allow the current pass through, so the power loss is not obvious, the electrical monitoring system can not detect the defect. After a number of thermal cycles (day and night, summer and winter), the chips gradually separate from the main part, the power output also gradually decreases. What worse is that the monitoring system still can not find it, because it is a gradual change and the monitoring system will take it as normal degradation or measurement error. At the end, the module may have serious power degradation like the photo below we took in a PV plant.

Therefore, please be noted, people can not step on the modules, that will result in invisible cracks. The power output may not decrease obviously at beginning, but the cracks will grow wider and longer as time, and result in power degradation later. The gradual change will not be found on the monitoring system, but it can be easily found with system EL inspection.